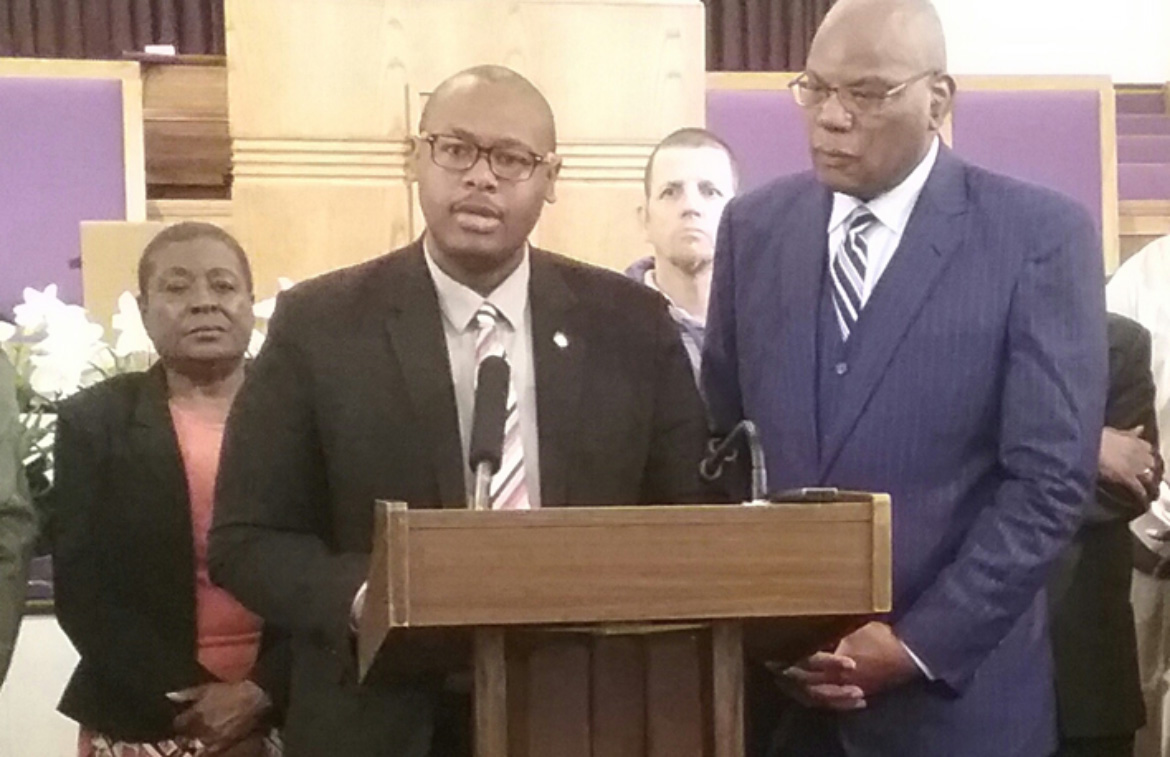 When Melvin Blackshare was asked by his granddaughter why he couldn’t vote, he got a little choked up.

“I tried to explain to her that I couldn’t vote because my rights are not restored yet, even though I’m out of prison,” he said.

Blackshare is one of 1.5 million ex-felons who can’t vote unless they are cleared by a clemency board headed by Gov. Rick Scott. Federal judge Mark Walker recently ruled that the process is unconstitutional, giving Scott until April 26 to change the system.

Blackshare told of his plight this past Friday during a press conference at Bethel Missionary Baptist Church, where the Rev. R.B. Holmes led a group of religious and community leaders who called on Scott to adhere to Walker’s ruling.

“This is the next step; restoring the civil rights of this group of Floridians,” said Holmes, pastor at Bethel and publisher of the Capital Outlook. “They deserve their rights when they have served their time and stayed out of trouble, we can’t reduce them to sub-humans or three-fifths of a person.”

In his 21-page ruling, which came about after the Fair Elections Legal Network sued over the clemency process, Walker suggested that felons should not be put in a position to wait longer than one election cycle for a decision on their voting rights petitions.

“There are problems of potential abuse – especially when members of the board, who are elected on a statewide basis and who may be running for reelection or another office, have a personal stake in shaping the electorate to their perceived benefit,” Walker wrote.

Felons can’t currently get their voting rights restored unless the governor and a clemency board approves. The process could be a sometimes lengthy one with no guarantee a felon’s rights will be restored.

“This is a defining moment for this great state,” Holmes said, referring to Walker’s ruling. “We must win this battle to get the clemency board to restore the voting rights of our people who have served their time. We cannot relive Jim Crowism where folks had to die for the right to vote.”

Even if Scott doesn’t act favorably, the issue is on this year’s ballot as Amendment 4. Former Tallahassee mayor Dorothy Inman Johnson said she hopes it doesn’t come down to the electorate to decide the issue.

“We hope the governor would not appeal this and drag it out,” she said. “Instead, act fairly on behalf of people who have been denied their right.”

However, it’s apparent that Scott doesn’t intend to follow the judge’s ruling, according to a statement from the governor’s communication director John Tupps.

“Officials elected by Floridians, not judges, have the authority to determine Florida’s clemency process for convicted felons,” Tupps said in the statement. “This is outlined in Florida’s Constitution and has been in place for more than a century and under multiple gubernatorial administrations.”

As Walker inferred in a portion of the ruling, politics hover over the voting rights restoration issue, said Lee Johnson, pastor of Love by Jesus Family Church.

“It’s about how many can we take off the roll  so that the other party will be able to win,” Johnson said. “We know that in 2018 there is a crucial election coming up and we have to make sure that we understand why this is being done. We have to work much harder and (be) much more diligent than before.”

Some of that hard work will take place during a rally that ironically will take place on the April 26 deadline that Walker set for Scott to respond. Several national civil rights and religious leaders are expected to participate in the rally at the Capitol.

Delaitre Hollinger, president of the local NAACP chapter, appealed for support of the rally, which is being organized by Holmes, who also serves as president of the Tallahassee chapter of the National Action Network.

“We are ready to continue to fight for the restoration of rights for those who have served their time,” Hollinger said. “Those who have paid their debt to society.”