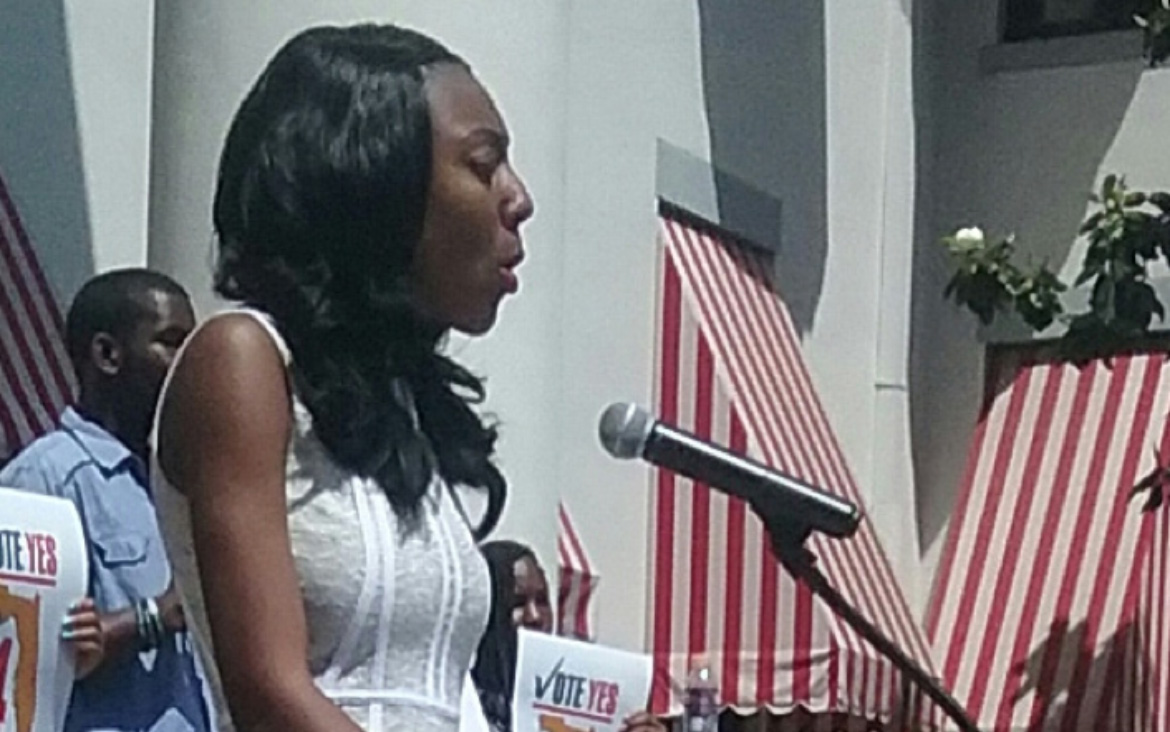 As communities around Florida intensify a call for the state to do away with its current clemency practice, millennials are voicing their support in the push for restoration of ex-felons’ right to vote.

“This is long overdue,” said Adner Marcelin, who identifies himself as a community activist. “We have a system that punishes and re-criminalizes felons who have served their time. Like the speakers said today, we needed to come back in and have this automatic restoration of rights because what they are doing is keeping a lot of voters out of the pool.”

Marcelin was among a large turnout of millennials who showed up at a march on the steps of the state capitol in Tallahassee. A group of ministers and civil rights leaders, including Al Sharpton, spoke against the 150-year-old Florida clemency law.

Many of the millennials said they were inspired by what they heard from speakers, leaving them motivated to commit to supporting Amendment 4. The measure intended to automatically restore ex-felons’ right to vote will be on the Nov. 6 ballot.

It needs 60 percent of the votes to become law.

“Never in my lifetime did I imagine that I would have to fight for one’s right to vote,” Tawanna Franklin, president of Black Law Students Association at FSU, said in a rousing speech. “My parents, grandparents and many others before me fought for the same right so long ago and it baffles me. This should be a non-issue.”

Franklin called out Gov. Rick Scott, who along with members of his cabinet make up the clemency board. Scott recently scored a mild victory when an Atlanta appeals court granted a stay of an order by Florida judge Mark Walker.

Walker ruled in March that the clemency system is unconstitutional and had given Scott until April 26 to come up with a revised system. The stay by the appeals court now means that the Nov. 6 vote could decide if the system changes.

“We must allow the voices of our brothers and sisters, our neighbors and community members to be heard through ours,” Franklin said. “Today we march and speak boldly and proudly for those who have lost their right to vote. Those who have been convicted of crimes are still people. They are still citizens of the state and this country.”
Al Sharpton, president of the National Action Network, called the current law a throwback to the Jim Crow era. He and other speakers called the system unjust and suggested that it’s intended to keep Blacks from voting.
An estimated 1.5 million persons have been convicted of felonies live in Florida.

Several college students carried signs to show their support for the campaign against the state’s clemency law. Among them was Alexandria Washington, a FAMU student and former Miss Black Florida US Ambassador.
She praised the speaker who shed light on the relevance of history and today’s fight over voting rights.

“Understanding the history and culture that we come from, our ancestors did the same thing,” she said. “It’s time for millennials to step up and take our rightful path. They blazed this path for us to be here today so now it’s time to continue and finish what they have worked hard all these generations to do.”