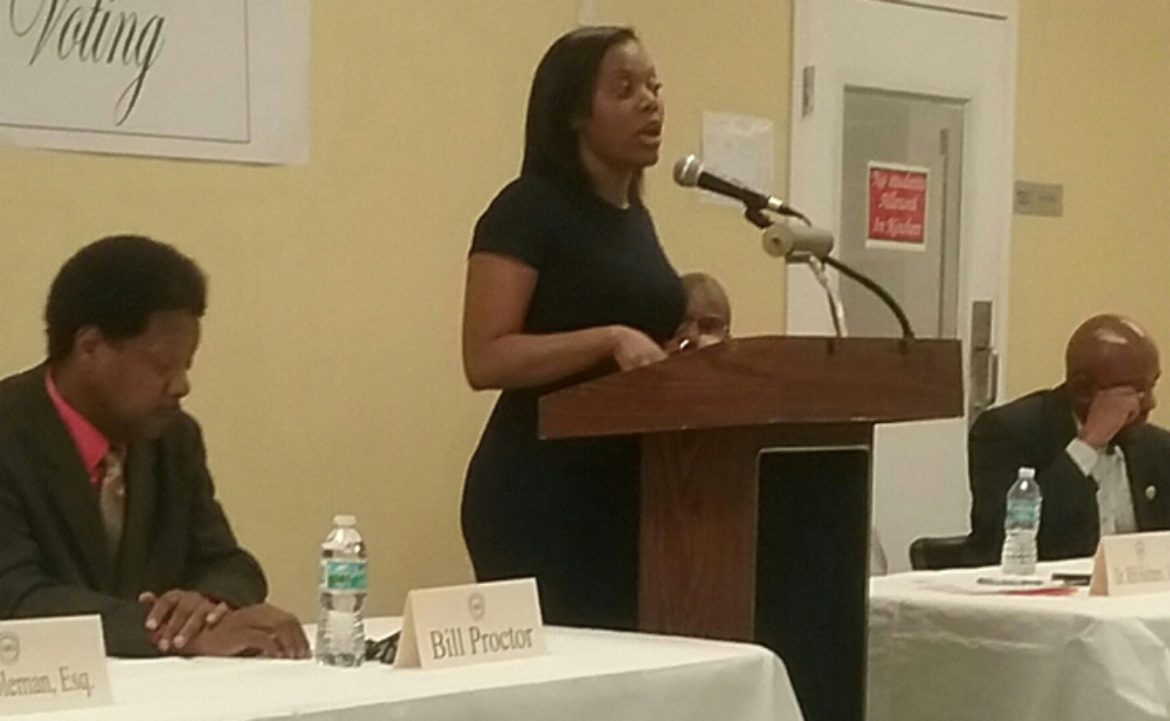 A group that included a prominent politician and professionals urged Blacks to remember their ancestors’ struggle for the right to vote, use their finances and rally their communities to unite for changes during the upcoming elections in November.

The panelists that spoke on the topic of the importance of voting also called on young people to register to vote during a town hall meeting staged by the National Action Network at Bethel Family Life Center.

In particular, the audience was urged to vote for Amendment 4, which will restore the voting rights of ex-felons.

“Go out and meet local candidates,” said attorney Jami Coleman. “Engage them (and) ask them those difficult questions; why are you running, what can you do for my community and find out what their answers are. Make sure it’s not just canned (and) it’s not rehearsed.”

Coleman got the backing of the rest of the panel when she suggested that communities focus on one issue and seek out candidates who have it on their agendas. Former Tallahassee Mayor Dorothy Inman Johnson, who recalled growing up as part of the youth movement during the early years of the civil rights movement in Birmingham, Ala., said a united front would bring about change.

“We have to speak with one voice,” she said. “We can’t be out there with a zillion different messages.”

Calling this year’s election a pivotal one because of the many issues that could affect Blacks, attorney Mutaqee Akbar said voters should assess their choice of candidates for what they’ve done.

Larry Rivers, a history professor at FAMU, used a matter-of-fact, approach to remind the audience of tactics used to suppress Black voters. The practice is still occurring, he said, using gerrymandering through redistricting.

“Yes; unfortunately voter suppression is as old as this country,” he said. “The United States Constitution, the highest law in the land, condoned the suppression of the Black vote early in its history. Others have taken their lead from the constitution.

“Voting suppression in this country must stop now. Please let no one– No one take your vote from you. Please vote.”

Both Rivers and Reginald Ellis, also a professor of history at FAMU, gave several examples of vote suppression from the 1800s to present day. One example was “the eighth box law” which was used in South Carolina to sidestep the 15th amendment in 1882, disenfranchising Blacks, said Ellis.

Even the controversial meddling of the Russian government in the 2016 elections was intended to affect the Black vote, said Leon County Commissioner Bill Proctor. He suggested that Russia’s involvement was intended to push a White supremacist agenda and keep Hillary Clinton from becoming president.

To the present day, Inman Johnson said, some voters’ registration requirements are keeping Blacks from voting. She suggested that those requirements tend to affect young people most.

“We cannot afford to let challenges keep us from pressing forward,” she said. “We have to do it in spite of. Otherwise we are throwing our hands up and saying come at us; we don’t have the power to fight back.”

More than 20 minutes was spent discussing the rights of ex-felons to vote. That has been a hot-button issue because  of the declining number of ex-felons who have had their voting rights restored through clemency under Gov. Rick Scott.

Federal court judge Mark Walker recently struck down the state’s system for determining which ex-felons should have the right to vote. The judge said in a lengthy ruling that  Florida’s stance against ex-felons is unconstitutional.

Walker was responding to a suit brought by James Michael Hand and eight other felons. They were ruled ineligible to vote although they’d completed their sentences.

Passage of Amendment 4 will do away with the state’s practice for clearing ex-felons.

“Men and women who served time in prison and paid restitution ought not be treated like three-fifth of a man or woman,” said Rev. R.B. Holmes president of NAN and moderator of the event.

The panelists agreed that a strong turn of Black voters for the local elections would be the best way to affect change that benefits Blacks.

“I hope this is just the start in getting us energized to rally to do everything we know how to do to turn out that vote,” Inman Johnson said. “We have to learn to vote in every election.”